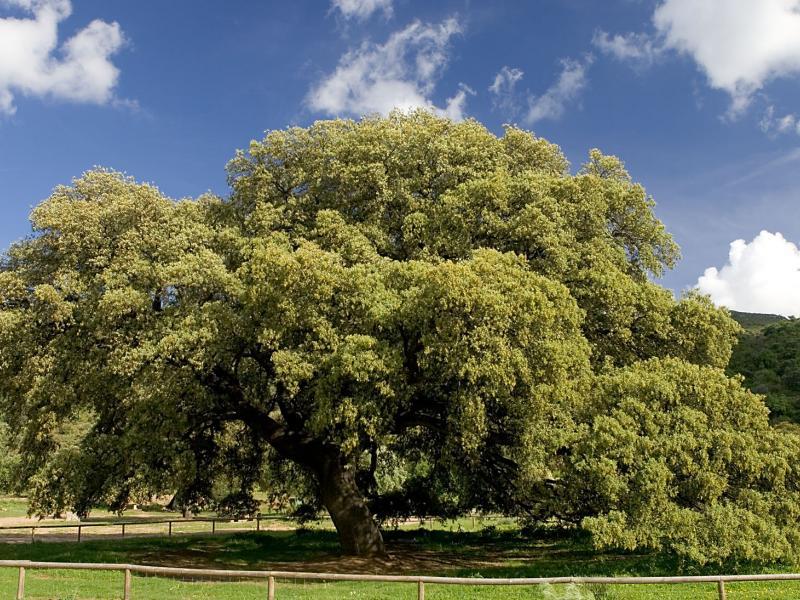 Rugged scenery in the highest area of the province

You can enjoy spectacular sunrises and sunsets in the landscape of mountains, hills and cropland of the Sierra Sur of Seville. Framed between the Sub-Baetic mountain ranges and the valley of the Guadalquivir, the Sierra Sur region has the highest altitudes in the province, which are home to large agricultural towns and the Route of the Castles, surrounded by a wild and rich natural environment. Holm oaks, pine forests, pastureland and the characteristic Mediterranean scrubland can be found here.

In Coripe it is well worth visiting the Chaparro de la Vega, a holm oak of more than 700 years of age, with a 23-metre crown, declared a natural monument.

In the highest area of the sierra, it is possible to see birds of prey. In the Peñón de Zaframagón Nature Reserve in Coripe, there is also a large colony of griffon vultures. And you should not miss the Greenway, a 32 km long former railroad track; a perfect way to enjoy the landscape and nature of the sierra.

There is also a generous amount of water in this region, creating areas of special interest for their fauna and flora. In Badolatosa the reservoirs of Cordobilla (classified as a site of international importance as a wintering ground for the white-headed duck), in the river Genil, and Malpasillo (classified as a Natural Park) are surrounded by tamarisk, wicker, poplar, elm, and dense riparian vegetation of reeds and bulrushes. The great diversity of habitats in the area encourages its occupation by a wide range of species: ducks such as the mallard, the red-crested pochard and the northern shoveller; fish such as the barbel, the bogue and the royal carp; and birds of prey, increasingly abundant in the area, such as the golden eagle, Bonelli's eagle, common buzzard, Montagu's harrier, sparrowhawk and peregrine falcon, among others. The game species include the red partridge, the hare and the rabbit. The pink flamingo and the great cormorant are two of the most striking wintering species in these areas in recent years. Both are classified as RAMSAR sites, wetlands of international importance.

In Martin de la Jara you can visit the Laguna del Gosque Nature Reserve, an endorheic and seasonal wetland near the Sierra de los Caballos. It is part of the network of ecological corridors made up by the wetlands of the province, and pink flamingos, black-footed plovers, common coots, ferruginous ducks, and teals can be observed there. It is a wintering and resting area during migratory periods, being a breeding ground for the white-headed duck and numerous other species of waterbird. It is classified as a Wetland of National Importance. Its saline character gives rise to a vegetation more typical of the marshes than of the interior, with the presence of diverse endemic botanical species such as the Althenia orientalis, aquatic macrophytes, etc.

The lakeside vegetation consists of tamarisk, reeds, rushes and marsh samphire, a plant adapted to high salinity conditions that occupies the northern shore. The lagoon is surrounded by olive groves, vineyards and arable crops. These are interspersed with stony areas with low scrub species such as rosemary, white rockrose and gorse or high scrub species such as kermes oak and wild olive. In the sunny areas, esparto grasses grow.

And finally, of course, there are the sierras with the Ruta de los Bandoleros ("Bandit's Route"); Montellano with the Sierra de San Pablo and the Tajos de Mogarejo, an escarpment declared a Natural Monument; the Sierra de la Acebuchosa in Lora de Estepa; the Peñón de Algámitas and the Sierra de Esparteros, in Morón de la Frontera; the Sierra de la Cruz and the Arroyo del Búho ("Owl's Stream") in Pedrera. In Pruna we find the highest point in the Province of Seville, the Pico del Terril (1,129 m) in the Sierra del Tablón. On its north side we find strawberry trees, oaks, rockrose, gorse, etc. There is also a wide variety of fauna, particularly Mediterranean scrubland species: eagle owls, short-toed eagles, Bonelli's eagles, kestrels, wood pigeons, jackdaws, thrushes, starlings, Thekla larks, etc. The dominant species include genets, weasels and badgers, along with rabbits, field mice, hares and partridges. There is also an abundance of wild boar. Griffon vultures can also be found in the area, due mainly to the proximity of the Peñón de Zaframagón Nature Reserve, one of the most important reserves of this species in the Iberian Peninsula.